Buzz? I don't hear a buzz. What buzz?

The deal I made with myself when I left the office Tueday evening was to either fix my computer or write a blog post. Welcome to the lesser of two evils.

I built the computer a few years ago with my bare hands (literally smelt the metal on my cook top...) and it has mostly served me well. Only now it emits this odd buzzing noise which, despite five months of stern looks in the general direction of the half open tower and a bit of prodding at the fans, refuses to abate. I even went so far as to obtain a second tower full of replacement computer parts (though not enough to constitute a whole new computer soldier) and set it next to Tower #1 to represent the threat of war. "Do not mess with me! I can pull your innards out and go all Frankenstein on your ass!" I leered, "Don't think I won't... right after this episode of Best Week Ever is over and I finish shredding 2 months worth of junk mail." But still the buzzing persists (right beneath the satisfying growl of the shredder).

People will claim that I am annoyingly tolerant of any high pitched noises in my living room (Dirty.). My television has a whine that a few times and hour crosses the line between "audible only to dogs" and "dear god why is blood pooling on my shoulder?" Since replacing or, even less surmountable, fixing the TV seems shockingly painful I mostly just dab a Kleenex at the problem and focus on tuning out high frequencies. I excel at avoiding problems that can't be fixed without me committing suicide via sighing in agony so often that I fail to breath.

The computer buzzing highlights three of my most painful personality flaws: I am lazy and shallow with a side order of miserly.

I see my homebuilt computer as the castle where my geek cred lives. I may not program any longer and I may find first person shooters painfully boring and I may roll my eyes at the mere thought of the SCA but dammit I BUILT MY OWN COMPUTER. Give me my geek pin! I would take a moment here to address the irony of putting so much effort into being the antithisis of cool but I think the world (or at least the world of blog readers) has long since accepted that the geeks have inherited the earth. Hail Cthulhu (See? A Cthulhu joke! GEEK!)

In addition to possibly being the last proof I have of my geek nature Tower #1 is the cheapest means to a computer end. I built it (bare hands! gloveless!) in 2002 after a particularly painful experience at a computer parts store where, unsurprisingly, the staff had never actually talked to a girl before. I originally had installed on it a dual boot to Windows or Linux -- this was done entirely in service of geek cred as I used the Linux OS only when some thing broke badly in Windows that I was (shockingly) too lazy too fix right away. The computer occasionally chokes -- the video card has been replaced twice, I stuck in a new hard drive a few years back and upgraded the motherboard in 2005 -- but replacing a broken part is infinity cheaper than buying a new computer (which seems to be what Dell and IBM and Apple expect virtually everyone to do once every 3 years or so).

So Why not fix it? Lazy, remember? Fixing the computer requires knowing what's wrong with the computer and as far as I can tell there is no clear source for the buzz. It's not the fan. It also seems like it's probably not the processor fan -- though it might be... but replacing the processor is a huge pain and... maybe I should just buy a new computer. Later. After I take off my old nail polish and look up recipes for tatsoi and find the album art for every song I have in itunes. And, of course, right after I finish this blog post.
Posted by Brianna at 7:15 AM 6 comments:

Of Course TV Brings Me Out of Hiding

Now, this show may not be that awesome, it's no Buffy, it's no 90210 (old school, 'natch it's got scads on the new swill) it's probably not even on par with Dawson's Creek (not that I watched that crap even if it is perhaps the favorite show of a certain guy who I am dating who I promise is NOT GAY (though I know everyone reading this wishes he was cause how awesome would a Winner Parade post about the guy who dumped me for a dude be? Alas). Gossip Girl is sometimes even annoyingly unwatchable -- I am constantly tempted to fast forward through Dan And Serena blathering about how hard it is to date when one of you is super rich and the other is only sort of rich or Jenny pretending she is a fashion maven and not a 14 year old girl who appears to be wearing a junior bridesmaid dress BUT I stick with it because Chuck Bass is the most awesome character ever created. 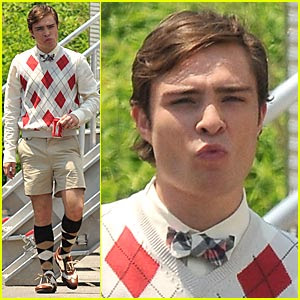 Everyone not working at the CW: Monday nights, 8pm
CW Staff: Please make everyone else on Gossip Girl more like Chuck (start with mandated velvet penny loafers for all and work from there)
Posted by Brianna at 3:13 PM 3 comments: