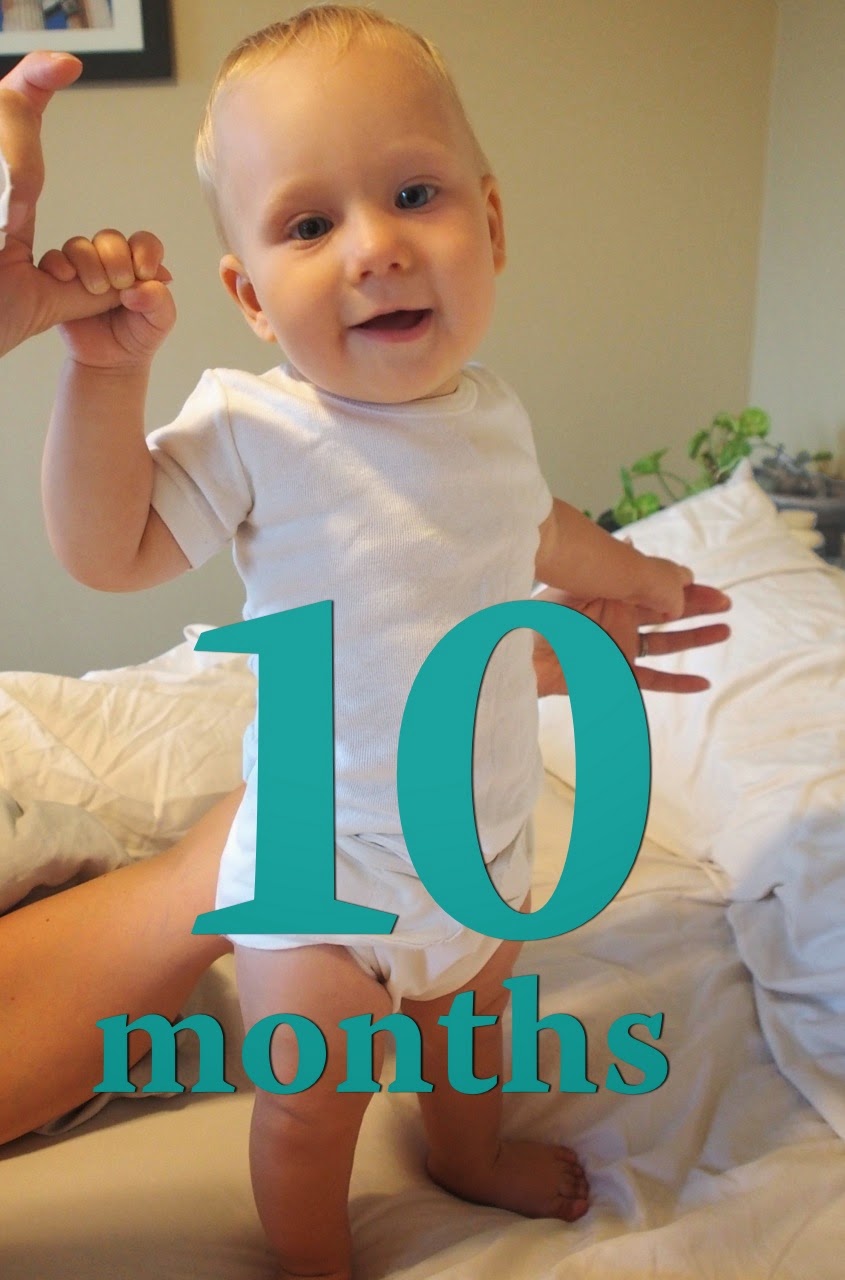 You are still a baby but this month, for the first time, I see glimpses of a little boy and it is freaking me out. Maybe it’s that mess of hair that is fast growing over the tips of your ears. Maybe its your insistence on being upright as much as possible. I had my first and second cries over your growing up this month. Never has time moved so quickly. Never before has 1 year, 5 years, 18 years felt like not long enough. 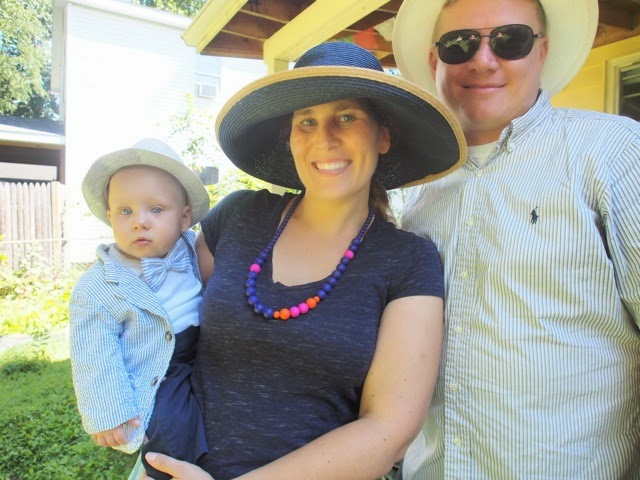 November and your first birthday are painfully close. I find myself regularly wishing that you would stop growing, stop aging and then scolding myself because getting bigger and older is what healthy babies do. 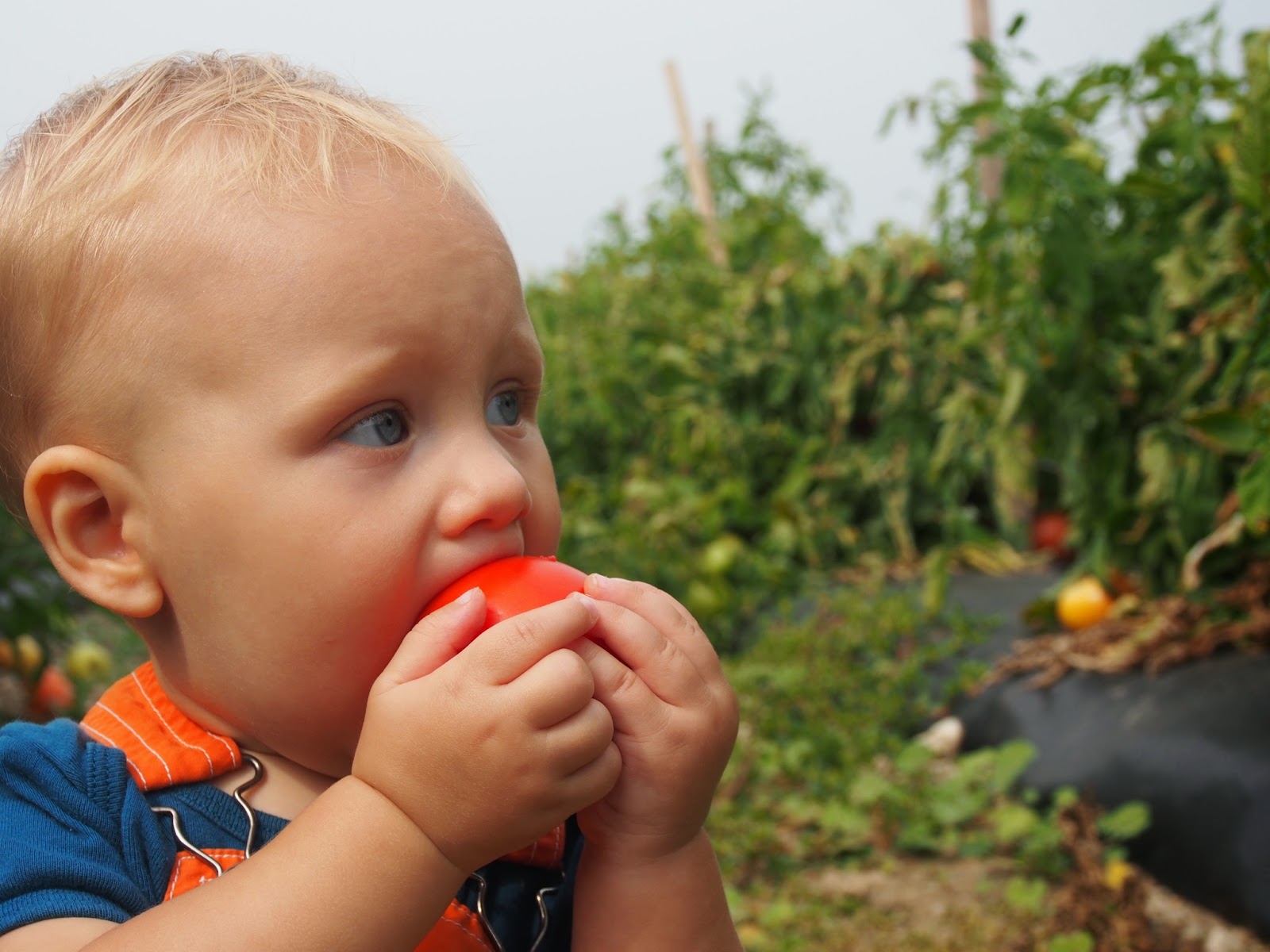 It has been, once again, a month full of milestones. You started clapping on 8/24 -- I have never received so many rounds of applause for so little actual performance. The next day you surprised me by cruising from the ottoman to the entertainment center -- a leap of only 5 inches, but a leap all the same.

On 9/2 your nanny, Kenesha, showed us that she has taught you to do an indian call which left me feeling super non-PC for the rest of the month as I tried to explain the trick without explicitly calling it an “Indian call” (“You make an “ahahahaha” noise by bouncing your hand on your lips? Do you know what I mean?”). 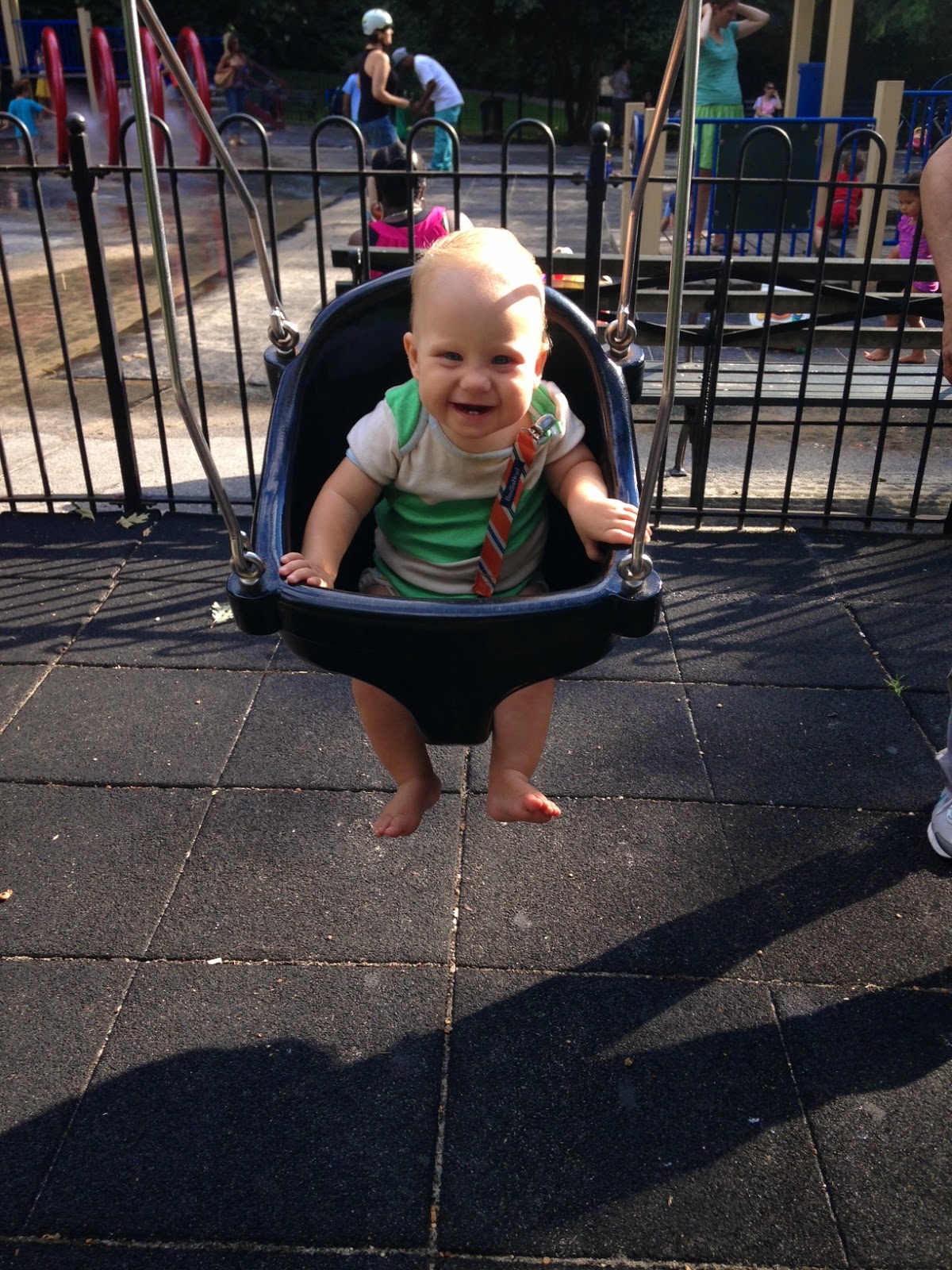 You’ve continued to put off traditional crawling and we worry that you’ll forgo it entirely in exchange for early walking. You are a pretty proficient army crawler -- swimming across our hardwood floors when motivated to chase a toy train or snack on some electrical cords. On 9/4 you started getting up onto hands and knees and revving your engine by rocking back and forth but you revert to the tummy crawl when you actually want to go anywhere.

By 9/6 you were pulling yourself up on the edge of the bathtub or onto the ottoman and on 9/8 I officially lost my happy sitter. Gone is the baby who would stay quietly on his blanket immobile and playing with toys. Suddenly, you are everywhere. Under the jumperoo. Sampling dead leaves off of the doormat. Pulling the power strip out from behind the armchair. I will never be able to sweep enough to keep the outside out of your insides. I have already, multiple times, considered the cliche of taping a swiffer pad to your belly to exploit the free cleaning opportunities that an army crawling infant presents. 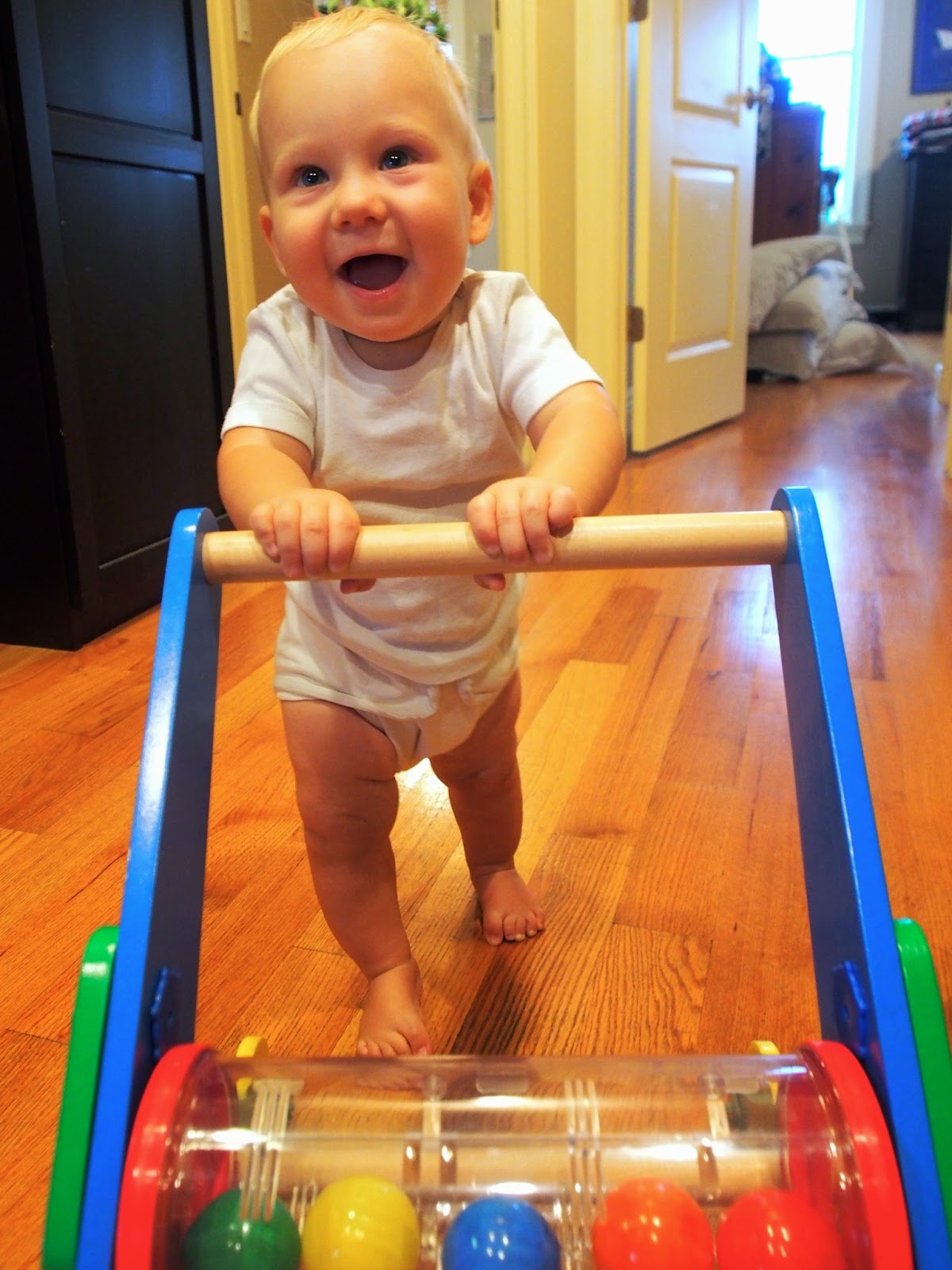 You want, very badly, for someone (anyone, really) to let you hold their fingers so you can walk around all day long. Often when I move to set you down you lock your knees to try to force me into a walk-a-thon. If I do manage to detangle my fingers from yours and step away I must endure cries of outrage followed by rivers of baby tears.

This probably doesn't count as an actual milestone but you have also discovered my face this month and have taken a real conquistador approach to the exploration. You push my head to the side so you can fiddle with my ear. You force your little fingers between my lips to feel my teeth. In the morning when you're lying between your dad and I in our bed you seem to wait until one of us starts to drift off before shoving your pointer finger up into our nostrils. This is not my most favorite thing about you. 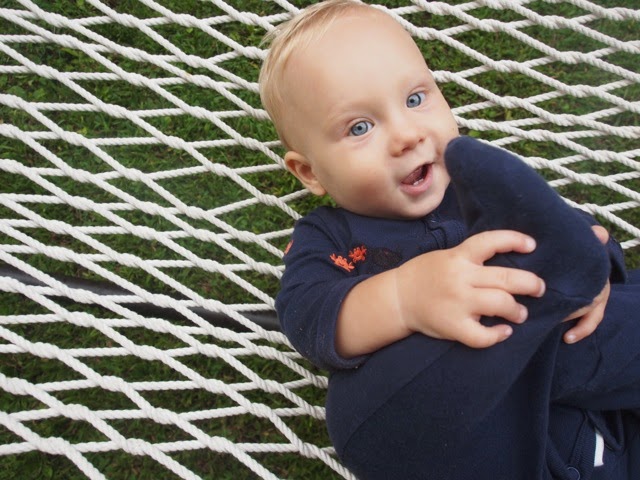 Despite the nose rape you've made morning my favorite time of day. Before you were born I slept until 8 and couldn't imagine enjoying a 6:30am wake up call. But you are so joyful after a good night of sleep. I can't help but look forward to your snuggles and giggles even if the sun has yet to rise. All three of us get a solid two hours of hanging out together before the day really begins and it feels like truly stolen moments. It's 7am. No one ever calls or texts. No one expects us to be anywhere but home. These found hours are just for you. I'm more tired at night than I used to be. I go to bed at 10pm and feel like kind of a loser for doing so but being lame is worth it.
Posted by Brianna at 2:13 PM No comments: