There’s a classic sci fi movie from back when movies came only in 2 colors called Them. In this flick sent straight out of my nightmares giant ant aliens land on earth and begin seeking revenge for all of the delicious picnics that their earthling brothers and sisters were never invited to. They rampage buildings, eat people and (I think) fashion giant magnifying glasses to give all 8 year old boys a taste of their own medicine. It’s some scary shit. Anyway, everyone in New York City is now basically living through this cinematic nightmare in real live living color. In the Broadway version of this little masterpiece the part of the giant alien ants is being played by Cimex lectularius aka the devil’s insect minion aka the common bedbug.

For those of you not living in the NYC let me catch you up on what’s going down. Basically bedbugs be raping everybody up in here. They’re in our movie theaters, our tourist traps, our douche-y clothing stores our fanciest pantie palaces, nothing is sacred. So far (as far as I know) they have yet to infiltrate Casa de Babble probably mostly because I am freaking the fuck out all of the time. I give furniture and mattresses left on the street a 5 foot berth, I get my nose right up against hotel sheet and stare down the thread count looking for little black or red dots. I pretty much will not go to the movies anymore and I spend every taxi ride thinking about the colonies likely lurking beneath the Naugahyde.

It used to be that my evening routine went something like this: start to fall asleep in front of tivoed episodes of Toddlers in Tiaras (sweet dreams!), drag myself up off of the couch, brush teeth, wash face, say my bet hedging prayers, run through a few OCD games to lull my mind to sleep and Zzzzz. But now somewhere between OCD and snoozeville I’ve inserted 45 minutes of fun called “OH MY FUCKING GOD IS THAT A BED BUG ON MY ANKLE?” Turns out that when you lie completely still mentally scanning your skin for signs of creepy crawlies it is very easy for every spare thread/dead skin cell/air molecule to feel like the stab of bug fangs.

Worse then this is how my home has been turned into a battle ground. My enemy? Each and every bug-sized bit sticking to my bare feet, caught behind my ear or glued to the sweaty back of my knee. Each stray breadcrumb, missing ball of earwax or lonely grain of salt is suddenly a potential threat. Saturday night I had to get up from watching Harry Potter and the Half Blood Prince to turn on a light and examine a small black flotsam of suspicion for signs of buginess. It came away still unidentified but too misshapen and flat to be a bug. I remain on guard. Before bed last night, while peering over my shoulder and into a full length mirror to examine my back for bites, I noticed that I have enough moles back there to warrant a visit to dermatologist, unfortunately I can’t make an appointment because what if the doc finds a bedbug bite somewhere on my person? Certainly the embarrassment alone is scarier than skin cancer.

I know that if an infestation breaks out in my house life is pretty much over. 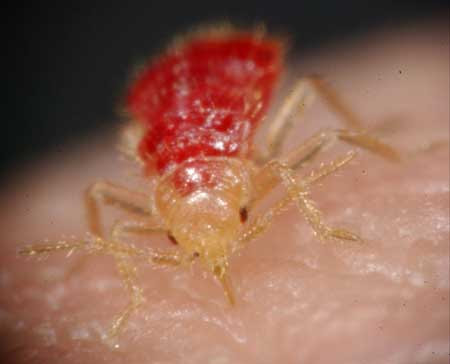 Like other species of bloodsucking vampires, bedbugs are basically immortal. They can go a year without feeding. They can withstand temperatures down to -26 F and up to 115. They are resistant to pretty much all legal pesticides. Luckily, they do not sparkle in the sunlight or have exceptionally well tussled hair or the future of the human species would be doomed.

So here’s what happens when all of your worst nightmares come true and you spot a fat little blood filled insect wobbling across your pillow. First you freak out and cry a lot. Then you call every exterminator in the city who will tell you two things:

So of course you give them all of your money. Then you find out that you have to throw away everything you own because it is actually owned by bedbugs (possession being at least 9/10th of Mother Nature’s law). Eventually you have to come out to friends and family about your infestation and understandably they all disown you rather than risk catching your gross bedbugs. You should probably get a therapist to deal with this traumatic life experience but you have no money and realistically there ain’t no shrink willing to risk bedbugs taking over his couch. So, basically then you commit suicide. The end.

Long time readers of this blog will remember that I make one exception in my greenie hippy rules for living and that my friends is for bug killin’. And in the case of the bedbug I am pretty much willing to get cancer if it will rid my fair city of this nightmare. You heard me right folks: It’s time to bring back the DDT. Back in the 40s they DDT bombed the bedbugs almost out of existence which raised morale in the country just enough to motivate us to take on the Nazis. Then the pesticide went and killed a bunch of bald eagles and I couldn't much blame the hippies for getting it banned until now. Obviously these are dire circumstances.