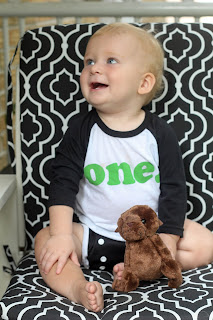 Oh Second Baby, you’ll see here that the writing about you over the past year has been sparse. I promise that the joy, the giggles and the love have been plentiful. It’s not just that somehow two children is more than double the work but that on your second child the newness is less. So much of the blogs about Casper were really, it turns out, about all mamas and all babies.

Your dad and I did get it together to take monthly photos of you in a white onesie so points to us for that! Looking at these I'm struck at how you never really looked like a squishy potato newborn. Even at one month you're a little man. 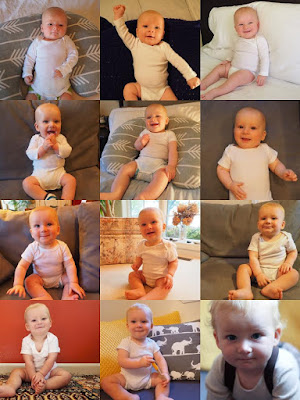 You are a happy baby but not a goofball like your brother. I'd hesitate to call you serious but we have to work a tiny bit harder for the smiles and you're rarely overtaken by a giggle fit. You can communicate no with a gleefully delivered head shake that seems to say "no way, you fool!" Recently, you started asking for milk by tugging at my shirt only to smirk and shake out an emphatic "NO" after I get the boob out. Hilarious. Your "yes" is a happy full body bounce accompanied by heavy excited breathing. Yes, I want a banana. Yes, I want to be picked up. Yes, I want to go get Casper at school. Yes, I want you to turn my walker around so I can push it at top speed down the hall.


You are figuring out that caps go on bottles, that socks go on feet, that blocks belong in a stack. So little of this knowledge can be executed on by one year old fingers and this is very frustrating. You know what you want and you screech when you don't get it.

You have a fistful of baby tricks: waving, blowing kisses, clapping, peek-a-boo, raspberries. Most recently you’ve learned to point at my nose on command.


Everyone still remarks on how much you look like your daddy. I can’t see it but I have to believe it’s true given the frequency of the comments. You're a big guy -- consistently in the 80th percentile for height and weight. We fear you'll pass up Casper soon (you already skipped over his first 2 pairs of shoes because your feet are gigantic). Your hair is a little bit red and a little bit curly. I'll take credit for the curl but the red is a mystery. 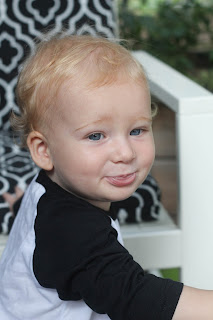 You are a fast crawler able to escape being chased or quickly dart into your brother’s room to get at his toys. You started crawling for real on 6/21 after at least 6 weeks of rocking back and forth on hands and knees and then collapsing into a ball of grief when you failed to make any forward progress. You’ve been standing unassisted for weeks but have not really walked save a few steps that were more like falling forward than true locomotion. I theorize that you’re less motivated to walk because crawling works so well for you but I still suspect you’ll be toddling soon.


You are big eater. We call you Goat because you’ll happily clean up your brother’s (ample) leftovers. You love hummus on a spoon straight from the container no chip or pita or carrot required. You love bananas and applesauce and pancakes and tomatoes.


You were a beast to sleep train. We spent two weeks of March trying in vain to get you to sleep through the night. You’d go down easily but awaken at some point to scream for milk for upwards of 2 hours each night. After 14 nights of even less sleep than I was getting when you insisted on being feed every 2 hours I gave in and returned to nursing on demand through the night. Once I was resigned to it I actually felt better. We had planned to try again when we moved into our new apartment and you into your own room in June. And then miraculously, we moved and you just slept. Night one, through the night, no wake ups. No effort required. Maybe it was the move out of our bedroom. Maybe it was the bigger home and being far enough away on a summer night when mom and dad left the window open in their room and the white noise from outside combined with the distance to drown out your screams. It’s possible that babies in large suburban houses are sleeping through the night only in their parents minds and that truthfully they cry a lot and no one notices. If a baby cries at night and no one hears him did he really cry? No he did not. 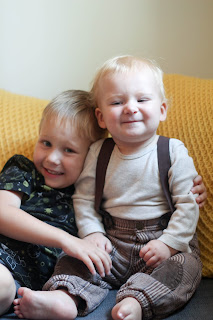 Your brother loves you very much. Recently he lunged at an older kid (his second cousin, Jackson) who accidentally bumped you screaming, “You have to be nice to him!!!” He gets on the floor to force you into a hug and coos, "I love him." On long car trips when you start to complain he leans out of his seat with comforting words, (“It’s ok Quincy, we’ll be there soon.”) and even instructs me to get you out first because you’re having a tough time. Very selfless for 3 years old.

You scream when you can't open your shape sorter, when you can't reach the balloon, when you see that there is food on the table and you're on the floor. You climb on everything. Chairs. Your brother’s bed. The step stool. You do not know how to get down from any perch so you swan dive towards the floor unconcerned with the consequences until impact.


For the past year whenever anyone would ask about the transition from one child to two your dad and I would respond, “The baby is easy. 3 year olds are hard.” But the calculus of which child is the hard one has now flipped. It's you. You’ll likely hold this title for at least a few years (maybe until Casper reaches puberty?) and you’re really owning it. 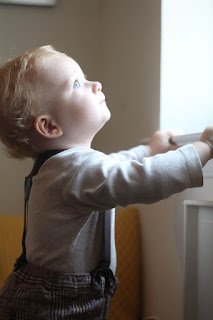 Posted by Brianna at 4:56 PM No comments: