It's a Shame About Juliana

On Friday night I boarded a time machine back to 1994 care of Evan Dando and Juliana Hatfield live in concert. Back in high school I felt like Hatfield was the only person who understood my pain. Every song she sang about low self esteem and boys who don’t ever like you enough seemed crafted for the kind of sorrow unique to 16 year old girls. Juliana and I were kindred mopers (despite the fact that she was living the dream of a successful music career and I was no where near cool enough to have a boyfriend with a drug problem.).

But that was 17 years ago and today the main draw for Hatfield/Dando was not the music (though I enjoyed rocking out the It’s a Shame About Ray as much as the next 33 year old living in deep denial about the passage of time). The point of the show was nostalgia topped with voyeurism. Dando and Hatfield were probably the power couple of college radio right before radio became completely obsolete. I say probably because back in 1993 we didn’t have gossip blogs so no one really knows the extent of their relationship which is great because instead of boring facts we can all make up salacious stories.

Here’s what we “know”. Dando and Hatfield dated for some portion of the 1990s but it didn’t work out most likely because he was very much in love with drugs. This did not stop Hatfield from pining for him for decades. Eventually Dando (in a drug fueled stupor?) married some supermodel but she apparently has only so much tolerance for crack smoking and last year they divorced. Dando presumably thought to himself, “Whatever loser, that one girl Juliana will always love me. Also it has been about 15 years since I even tried to make any cash and I am totally out of beer money.” Then he called up Hatfield and asked her to go on a tour and obviously she has not bothered to go to any therapy in the last 20 years because she agreed.

I owed it to my Hatfield obsessed former self to pay the totally affordable $15 ticket price for this concert and I owed it to my train wreck fascinated current self to cover the ridiculous ticket fees (which were actually not so bad since the concert venue used reasonable ticketweb not EVIL Ticket Master).

Friday’s show was everything I had hoped and feared. They played all of the awkward autobiographical songs that each wrote about the other and the audience squirmed and raised their eyebrows with glee over sharing the inside joke live and in person. (If you subscribe to my made up history (and I think most fans do) it is possible that every song that Hatfield ever wrote was about Dando. Evan? Duh. Choose Drugs? Obviously. Everybody Love me but You? Cool Rock Boy? Her entire discography is like an all Dando heartbreak-fest.)

Juliana spent the interim between each tune bemoaning how bad her songs were compared to Evan’s which predictably resulted in the audience yelling out We Love Yous. Whether this behavior was all an extremely elaborate contrivance to transport the whole room back to the self hatred of high school is unclear but it was certainly effective. Eventually Hatfield sang Evan (“Evan, I just love you I guess”), stole the set list and walked off stage in a (fake?) huff while Evan himself stuck around for a few more tunes. If they were acting the scene was superb if they weren’t it was insane.

It turns out that I am no longer charmed by prolonged wallowing any more than drug addiction. The tragic flaws that I once found painfully endearing now just seem like false depth. I love the girl I was at 16 but I am so glad not to be her any longer and perhaps I hate my 16 year old self just enough to take it all out on Hatfield. Not being the girl who mopes over guys and feels inferior is a point of pride and if Hatfield hasn’t grown up with me I’m angry at her for wasting the last two decades of her life. Its bad enough to have spent all of your 20s mooning over a boy who literally chooses drugs over you but to extend that into a life long depression brings out my eye rolling. At least Evan can blame the drugs -- what’s her excuse?

Of course maybe it was all an act. Concert as performance art taken to the extreme? BRAVO. Standing in the audience I was transported. I felt uncomfortable and angry and embarrassed in a way I have not since high school. I was judgmental like only a teenager can be. And now I’m exercising my own self obsessed navel grazing by basically journalling the whole experience. Viva 1994. 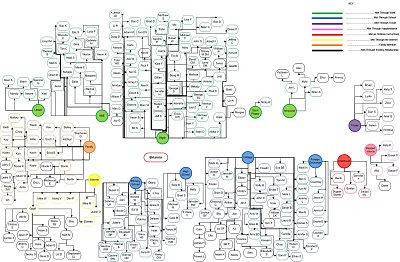 (click through for larger (though still not really large enough) version)
I don't know why I felt compelled to do this but now that it is done I feel a strange peace.
Posted by Brianna at 6:06 PM 1 comment: