Reboot: The Geoff and Brianna Story

Six years ago I went on a very bad first date. Or rather, I stood outside of a bar for 30 minutes before deciding that the date I thought I was going on was not happening. I had been stood up.

Luckily this is exactly the sort of thing romantic comedies are made of. 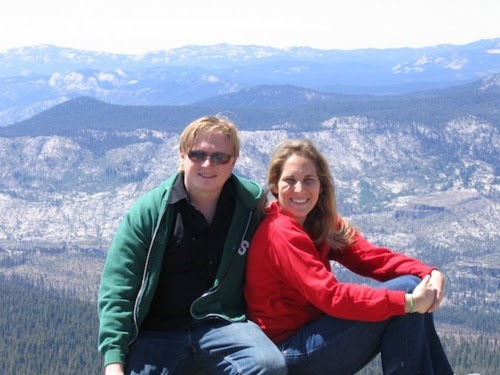 After a few weeks of exchanging witty messages over an online dating site, Geoff and I had finally decided to see if our real world selves were anywhere as compatible as our online personas. The afternoon of our date my mystery man (That’s Geoff) had emailed to say that due to troubles at the office he’d be about 15 minutes late to our 7pm meeting. “No problem,” I said. So when I arrived at the prescribed drinking hole at 10 to 7 (ever the early bird) I had no reason to expect to be anything but alone at the bar. I quickly glanced inside and didn’t spot anyone matching the pictures I’d seen of Geoff so I decided to wait on the curb. At the time I told myself that this was because a classy lady such as myself would not sit by herself in a bar but really I just hated the awkwardness of being alone in a place where people are usually together. I waited and waited and waited until 7:30, until 7:45 and then I called a friend to bemoan the pain of being stood up.

If someone had told me on that day that the stander upper guy would go on to become my husband I would have believed them -- I was a big believer that “the one” could be ANYONE. Even some jerk who didn’t see fit to actually show up for our first date. I was the type of annoying romantic comedy ingenue who underneath her cynical exterior was just so ready to believe in love! If only the right guy would show up and buff out her hard exterior! If only she would stop making off color jokes long enough to put on a little eye make up! If only she could let her inner lovey-dovey girly-girl SHINE!!!!!!

Geoff would tell this story differently. He was so excited about our date that he thought “screw work” and left in time to arrive at the bar early. He sat at the bar nursing a drink alone. He thought he had been stood up. (He thinks my waiting outside is the stupidest thing he’s ever heard). But even if he is totally wrong about how date #1 didn’t go down he still deserve credit for being brave and calling me up to find out what happened and arrange a replacement date. He is the type of romantic comedy romeo who might seem a little clueless on the outside but in the end comes through as the nice guy that the audience wants me to fall in love with as soon as possible.

I’d like to say that after we finally got around to a Hollywood perfect first date  (a stroll in Central Park followed by dinner followed by chaste handholding (classy lady, remember?)) we rode off into the sunset together -- but what kind of romantic comedy would that be? Before the happy ending someone has to spill their drink on the other person, someone else has to overhear part of a phone conversation and take it the wrong way, someone’s ex has to show up and say ridiculously inappropriate things, both people have to yell and shed buckets of tears and probably get drunk in some horrible dance club with friends who encourage them to let random strangers grind their private parts against theirs (Thanks guys!). Geoff and I would do it all.

We would fumble around in the relationship that is now known as “1.0” for almost a year before months of refusal by each of us to let down our guard and actually talk about feelings (eww.) resulted in the break up. I did what any recently dumped romantic comedy star would do -- I cried a lot, went to therapy and I made “dating other guys” my full time, get over him, job. Clearly that was a huge failure because here we are in our 2.0 relationship headed to the 3.0 of wedded bliss.

Breaking up was the best thing we ever did. It gave us both the opportunity to look around at the other goods on offer in New York City and decide there is no way we could do better than each other. It made us admit that our relationship was worth being vulnerable and embarrassed. It made us fight for our future.

I’ve really struggled with writing this essay. I want The Story of Geoff and Brianna to be so many things. I want it to be sweet and romantic -- I want everyone who reads this to feel how much my love overwhelms me with joy. I want it to be witty and funny -- perhaps the best thing about our relationship is its silliness. I want it to be smart and snappy. I want all of you to like us.

Despite the huge smile that I’m predictably wearing at the end of this movie I am still cynical enough to be just a little embarrassed about writing the next sentence. Most mornings I wake up and can’t believe how happy I am, how lucky I am to be sharing my life with someone this great. I follow that up with a brief internal freak-out about the possibility of Geoff dying in his sleep and then I fill my cereal bowl with raisin bran and get on with the day. Somehow he keeps waking up alive. I am blessed.
Posted by Brianna at 9:09 PM 2 comments: