The Internet Has Spoken 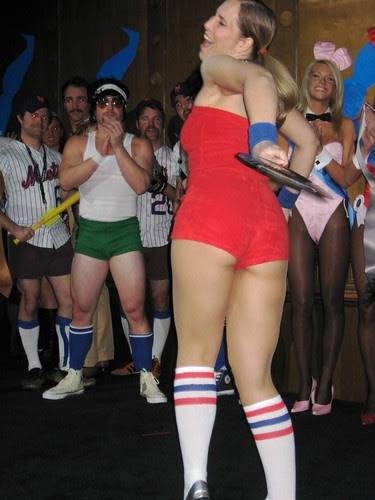 I have the best ass ever

Thank you to Google for telling the world what RAB readers have known for years.
Posted by Brianna at 10:28 AM 3 comments:

Kids These Days are Totally Not Gay

I found out recently that Kids These Days (particular KTDs who are dudes) are keeping up the grand tradition of making sure everyone knows that they are totally into chicks without letting go of the more recent tradition of "giving props" through the invention of the phrase "No homo." This is not a new development, apparently its been popular in hip hop for years but I'm assuming that my readers, like myself, are too old and uncool to listen to anything other than the occasional instrumental break on NPR so my making fun of it here will still feel witty and fresh.

So, a brief lesson in being 16 in 2009. Let's say you're a young dude and you really dig the hoodie that another young dude is wearing but you are very insecure about your sexuality and fear that any compliment given to a member of the same gender could be misinterpreted as a sexual overture that would most likley result in the other dude ripping your clothing off because (as everyone knows) you are super hot despite your chicken legs and face full-o-zits and thus all gay dudes totally cannot wait to get with you. Worry not, the phrase "No Homo." has your back(side). "Yo dawg that is a bitchen' sweatshirt. No homo." See? your boy feels good about his fashion choices without having to wonder/worry that you might be lusting after his sweet 16 year old behind. Brilliant.

Despite the overt homophobic tone of No Homo the communication concept itself is genius and applicable to millions of social situations where one needs to qualify a statement. In the spirit of No Homo I bring you the top 10 No Homo inspired qualifiers.

10. Tempah is really growing on me. No veggie.
9. In Italy we visited the Vatican, the architecture was beautiful. No Catholic.
8. I like your jacket "Thanks, its Prada but no richie, it was on sale"
7. I've just started brewing my own beer. No Alchie.
6. I'll take a scotch on the rocks for my boyfriend and just a soda for me. No preggers.
5. I think Miley Cyrus is really hot. No pedo.
4. I could totally kick your ass at Risk. No geek.
3. The reverse no homo (for the macho gay dude): I can totally change the oil in your car! No breeder.
2. I bought the most killer tiedyed shirt at last night's Phish concert! No stoner.
1. This sauerbraten is delicious. No Nazi

Special thanks to G, Sky, Lisa and Mike for all of there hilarious help with this post!
Posted by Brianna at 8:56 PM 8 comments: