As a child it was common knowledge in my family that my brother had been born breech (aka butt first). This is not the kind of information you should share with an older sister who enjoys nothing more than little brother tormenting and who is very much not in need of additional material. I used the fact that Kurt has been born butt first (a much more embarrassing description than “breech”) as the source of many joke for years.

“You were born butt first which mom and dad should have seen as a warning about what a little ass you were going to be!” *ZING*
“Everyone says that you were born butt first but the truth is that your face was so ugly that the doctors just thought it was a butt” (This can segue so easily into calling your brother butt-face for the rest of his life or until you are sent to your room).

I found out 7 weeks ago that my own baby is happily hanging out breech -- not a major concern at 29 weeks… “He’ll flip,” they all said. At 33 weeks I could still feel his big old head (husband’s gene for head size having been a concern from the beginning) nuzzled up under my right ribcage just as close as he can get his mouth to the boob while still in the uterus -- here’s hoping that at the very least this bodes well for nursing.

Karma, perhaps? It’s probably a case of “too little too late” but if karma cares I’m happy to apologize to my brother (who, it should be noted, seems fine and who, also, is a pretty attractive dude whose face is almost never confused with his butt.).

I’d really rather not have a c-section for the obvious reasons (fear of knives, desire to keep organs internal, lack of interest in picking up crying baby while recovering from a flesh wound. THE USUAL) but vaginal delivery of a breech baby for a first time mom is not a very safe option for the baby. If he stays butt down both my doctor and I agree that he's coming out Alien style. So I started researching baby flipping techniques. It turns out they are mostly hilarious. 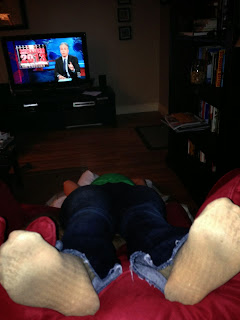 The big suggestion you’ll find online is something called the “breech tilt” this is fancy language for “lie upside down and try not to pass out.” I did this by stacking a bunch of pillows on the floor, positioning myself backwards on the couch and having my husband slowly lower me and my giant belly into a headstand. It turns out that as hilarious as lying upside down sounds the actual experience sucks. The official recommendation is to do this for 20 minutes at a time 3 times per day but obviously that is impossible. Not only do I need to avoid the headstands right after eating but I can only execute them when my husband is around to assist and after one 20 min session I need at least 24 hours to convince myself that another one won’t make blood rush out my ears. Also, lying there is super boring (despite what you see in this picture enjoying the Daily Show is very difficult). ALSO this all seems like crazy voodoo and every uncomfortable minute spent on my head made me feel more and more like a sucker who just might be part of some elaborate Candid Camera plot.

After one week of lying on my head everyday I came down with a head cold. Related? Probably not, but this killed any commitment I had to the experience. I switched over to holding a bag of frozen corn on the top of my stomach in the hopes that the fetus, like most of us, hates cold and/or corn on his head. I find it hard to believe that cold can actually lower the temperature in the womb but surprisingly the fetus squirmed and kicked like crazy. However, no effort was made to lower his noggin towards my pelvis.

Other suggestions include “place a paper towel tube [at the bottom of your belly] and have family members speak through it or play Beethoven.” Little known fact: the only music fetuses' like is Beethoven.  My husband stuck his iPhone with REM on repeat into the waist of my maternity leggings. No noticeable fetal reaction was felt.

Yoga instructors and other hippies will tell you to go to an acupuncturist or a chiropractor both of whom might have mystical techniques for flipping babies. If you’re a huge skeptic like myself considering this will rip your brain out. First you’ll go to various acupuncturist websites as recommended by the local parenting listserv and observe that 1. No one in the alternative medicine field crossed over into the world of Web 2.0 and 2. In addition to various needle poking services the proprietors would also like you to purchase some magic nuts from Brazil that will solve all of your life problems. (I am not making this up). You will close your browser and let yourself have a Coke, empty calories be damned.

At my 35 weeks appointment the doctor was no longer amused with the little one’s antics and we had to have “the talk.” The one that starts with her hand in my vagina and the words “Yep, that’s a foot.” and ends with “Let’s just check my schedule and see when I have free time to slice open your abdomen and pull your pain in the ass child out by his toes.” (Nov 21) She also recommended I go ahead and give the acupuncture a try since there was some evidence that it could work.  She offered no opinion on chiropractic services or magic nuts from Brazil.

Because I am, possibly, a huge racist who loves cliches I very much wanted my acupuncturist to be an old Chinese man -- ideally with a Chinatown basement office and, perhaps, a long hair growing out of a facial mole. Alas, everyone recommended by my yoga teachers and my doctor was, instead, some version of a patchouli scented white lady. Obviously. My expectations dashed I made an appointment for Monday morning.

The acupuncture technique used for flipping breech babies is called moxibustion. I researched it before my appointment so I was prepared for possibly some needles in my feet and some smoke blowing around my toes.  Though Wikipedia did mention that some practitioners found smoke insufficient and instead burned your toes until they scarred so… that sounded great.

The appointment was fine. A middle aged European woman asked me a lot of question about previous injuries and my pregnancy (seemingly sad to hear that I had no real tales to tell having had a delightfully boring life, medical complaint speaking). She put some needles in my feet, calves, arms and collar bone. I asked her what they were for but her explanation made no sense so I stopped asking questions because I felt bad. After the needles were placed she made me lie under a space blanket like I just ran a marathon and left me in the dark to whisper to my baby and whatever Chinese gods were present that yes, this seemed like some crazy voodoo but if baby would just flip over we could return to our regularly scheduled skeptical existence.

The acupuncturist returned to burn some yellow dried weeds on the edge of both of my pinky toes which were, thankfully protected by a coating of some black cream that seemed to mostly block the heat from reaching my skin. She used some fancy looking incense to light the dried weed on fire repeating this over and over again until I could feel the heat 3 times. I observed that each additional pile of ash made the spot on my toe look more and more like a really ugly toe mole -- hot tip if you’re interested in dressing up like a wart covered witch or an authentic looking old Chinese medicine man (the weed itself could for sure be fashioned to look like a mole hair).

And that was it. “If he doesn’t flip please come back on Thursday or Friday and give me another $150. “ (not a direct quote).

2 days later at my 36 week ultrasound his head is still pushed against my ribcage -- on close inspection you can see that his neck is tilted back and his little face is literally smushed up against the top wall of my uterus as if he’s trying to push himself out in the wrong direction.

The next step (besides, possibly another acupuncture appointment and/or a visit to the chiropractor) is something called an External cephalic version which is basically just the doctor pushing on the baby’s butt from outside of my tummy in the hopes that he’ll somersault himself over into the head down position. This procedure has a pretty good success rate (over 50%) but they won’t do it with a baby whose head is tilted up…. so we’re hoping the womb dweller decides to look down sometime before the procedure next Wednesday. Stay tuned.
Posted by Brianna at 3:33 PM No comments: