Baby and I spent the last nine weeks of my pregnancy bopping between lying upside down, having needles poked into my feet and failing an ECV attempt. The specialist trying to perform the baby flip first examined the little dude via ultrasound. But after confirming that his little face was still staring up at my own sadly declared that she didn’t think there was much chance of getting this particular baby head down. We were resigned to the scheduled c-section.

I wasn’t thrilled about picking the boy’s birthday for him but otherwise I was glad to be done with the (apparently futile) baby turning ridiculousness and move on to the baby having. With the fetus eviction scheduled for November 21st I embraced the project management beauty of a planned delivery. I scheduled my last day of work for Nov 15th. My parents rescheduled their visit so they could be here when we returned from the hospital. My husband scheduled a last fancy dinner out as DINKs for a couple of days pre-surgery.

In birth class and maternity books and all over the internet pregnant ladies are reassured that the way labor and delivery is portrayed in Hollywood is completely unrealistic. Labor takes a long time. Babies are pretty much never born in cabs. Almost no one has their water break spontaneously. All of this is doubly true for first time moms -- the message is clear. You won’t be surprised. You will have plenty of time.

My water broke around 12:30 pm on Nov 16th 2013 -- I was 38 weeks and 3 days pregnant. This was no trickle down my leg. At no point did I optimistically wonder if maybe I was just peeing myself (this suddenly being a more favorable option than the idea of having a baby that afternoon). Luckily I was at home and not actually living out some awful sitcom plot. I was chatting with my husband while organizing a few nursery items when I felt a pop, a gush and a pool installing itself in the gusset of my panties.

I rang the doctor from my perch on the toilet where amniotic fluid had gotten into an established pattern of gush, replenish, gush. I had tried to stop the flow with a pad but that had lasted all of 5 minutes before my pants were soaked through.

When I dialed my doctor I somehow wound up connected to a doctor’s office in Pennsylvania. Odd. I tried a second time. PA. A third. Very annoyed woman in Pennsylvania. This is when panic started to set in -- how was I dialing a New York City 212 number that I'd dialed myriads of times and ending up connected to another state? After 15 mins of looking up alternative numbers for my doctor and trying to call other doctors in the practice all of which continued to result in the twilight zone Pennsylvania experience the annoyed but ultimately nice lady on the other end of the line figured out that the doctor’s call service was forwarding incorrectly. By this time I was (obviously) crying and my husband had already called a cab but the Pennsylvania lady was finally able to get us a working number and the on call doctor (not my personal doctor, but my favorite of the others in her practice -- a spunky lady who always referred to fetuses as "munchkins") called me back while we were enroute to the hospital.

Initially the doctor wanted to wait a few hours before they performed the c-section since I’d eaten breakfast 2 hours before my water broke and surgery is safer on an empty stomach (due to reduced risk of my vomiting all over myself). But once at the hospital an ultrasound confirmed that the baby was footling breech with a heel resting on my cervix. This position made it possible that he might stick a toe out into the pool of the real world as soon as my cervix dilated enough. The baby extraction would have to happen ASAP. I was told not to get up from bed, Geoff was handed some scrubs and we waited for the doctor to arrive.

Things were going great: I was cracking jokes with the nurses, laughing at my pathetic little contractions (easy to do when you know you won’t be sticking around for the big ones). I was generally in a jolly mode right up until they walked me into surgery. Everyone who has a c-section notes that the operating room is scary medical experiment time compared to the floral wall paper and cheery baby welcoming posters of the rest of Labor and Delivery. The transition to fluorescent light bouncing off of gleaming white tile and metal instruments is jarring.

I had expected the insertion of the spinal to be pretty painful so when the time came I steeled myself but surprisingly it didn’t hurt much at all. I barely felt the needle though I did feel a weird rush afterwards like a hot tidal wave filling up my body. It wasn’t painful but it wasn’t pleasant. Once I was numbed up they brought my husband in and sat him on a stool by my head. They did not strap my arms down to the table which was a nice surprise. I could feel some movement below the wall of the sheet but no pain and once I got Geoff to talk to me was mostly distracted enough to not obsess over the fact that my insides were being exposed to the world.

When Geoff tried to peek over the curtain to watch the surgery he was chastised and told to sit back down which was surprising since we’d heard of many other daddies watching the procedure.

At one point during the surgery the doctor called out calmly, “cord times 2” -- indicating that the umbilical cord was wrapped around the baby’s neck two times. This accounts for his position -- with the placenta at the top of my uterus and the cord wrapped around the baby twice there was simply not enough slack for him to get his head down (insert “just enough rope to hang yourself” joke here). My husband later admitted to being confused by this announcement -- assuming it meant that somehow the baby had two umbilical cords and possibly also two belly buttons, he assured me that he has already committed to loving him anyhow. 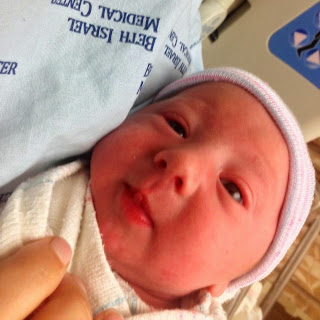 He screamed like crazy on his way out and all through being checked out by the pediatrician. We were later informed that the doctor had nicked his thigh when making the c-section incision -- the whole hospital seemed very worried about dad and I possibly freaking out about this but the actual injury was no worse than a paper cut and neither of us felt a need to get worked up. The doctor claimed he had a full head of blond hair -- this must have been a mistake because his hair is shockingly dark for a child born to two blond parents. We expect it to lighten up as he ages but who knows. Geoff was able to go over and hold him within a few minutes of birth and he brought him around so I could nuzzle his little cheeks and say hello while being sewn back up.

I spent 3 hours in the recovery room waiting for enough feeling to return to my bottom half that I could lift up my butt (this was the very scientific test they used… ). The nurses brought the baby in and tried to help me nurse but while Casper was doing his part (opening his mouth wide, making sucking movements, etc) I was still numb from the chest down and we couldn’t get him to latch on while I was lying down. The hospital was very pro-nursing and assured me he wouldn’t be given formula and would be plenty hungry when I regained feeling.

Those nurses were not lying -- once we got into our room around 8pm; Casper nursed like a little sucker fish and was quickly full of colostrum. Shortly thereafter I was full of sushi (nothing tastes better than formerly forbidden fruit eaten after 10 hours on an empty stomach).

At this point everything felt unreal. I had so little time to process the birth (I mean, besides the preceding 9 months…) that even sitting in my hospital room with the baby next to me I was still working through the shock of my water breaking -- never mind the whole getting cut open and having an actual baby that is actually mine for life thing. 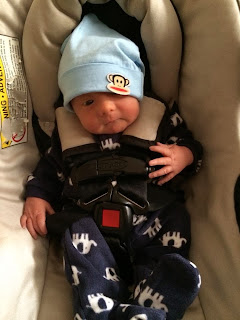 The c-section was much less painful than I’d feared. The pain meds did their job and I was up and walking to breast feeding class the next morning at 9:30am. Recovery overall has gone great. We came home on Tuesday November 19th after a small bit of last minute hospital drama about Casper having lost 9.8% of his body weight. We were asked to supplement at home with a crazy contraption involving a small tube taped to my boob feeding formula while he nursed. Casper declared war on the tube from the start arching his back, screaming and refusing to latch so after 3 attempts, a good cry and a long chat with a friend who happens to be a lactation consultant we gave up until our pediatrician appointment the next morning. Luckily my milk must have come in overnight because by the time we went to the doctor the boy was already up 5 ounces and we were told to ditch the silly supplementing. Breast feeding and baby life in general has been mostly smooth sailing since -- we feel very lucky.

Here comes the schmoopy part; get ready. I love him so much. I was never really worried about loving him but it’s also true that when asked on the first day of birth class what I was most excited about my honest response was, “having a 6 month old.” I’ve never been that into newborns -- they seem so needy and floppy and boring. But the hormones kicked in and I find myself sad that Casper will get bigger. That he won’t always be the perfect little compact baby that fits right on my chest (squishing himself back into his womb pose, legs crossed, knees bent, pushed over to my right side, gazing up into my eyes). Sometimes when his little grunt-y cries wake me up at 3am I feel a little jolt of excitement that soon he’ll be awake and I’ll get to hold him. He is my baby. From Fetus to Baby

I started his blog entry last week when baby was scheduled for be born on 11/21 (that’s today!) but he surprised us by demanding to come out on Saturday (11/16). I’ll be updating with that story soon.


Your dad and I joke around about if it’s possible to anthropomorphize you with statements like, “The baby likes pudding!” or “The baby is mad and showing his anger by kicking me in the cervix.” On the one hand you are human and you surely have little fetus wants and feelings but I have no way of knowing what they might be. Your kicking could be happy or sad or indifferent. Right now I know very little about you beyond the normal baby stuff -- you won’t know how to use a toilet, you can’t dress yourself, you need someone to feed you every few hours, you will need a lot of help with pretty much everything. But I’ve made some guesses based on your in womb behavior and documented them here. I can’t wait to see how right or wrong I am.


Things I knew about you before you were born:


Assumptions I made about you:


Things I hope for you: