So easy that I worry about some karmic pregnancy due that must be paid through a designated amount of pain and, since I’ve had it easy so far, the last 3 months and the (*gulp*) birth are bound to be as awful as possible.


I have had no morning sickness though I do have the occasional urge to throw up when I contemplate the enormity of birth and parenting. So far everything has stayed down save a few tears.

I’m sleeping pretty well even with the frequent bathroom trips -- so well in fact that I have caught myself starting to doze while perched on the commode sometime around 3am. Once I drag myself back to bed I’m on the express train to dreamland faster than I ever was pre-pregnancy.

I have had a few bouts of the drowsies -- mostly in the beginning, all were met with copious couch time, which was fine -- I have Netflix streaming and an iPad, the couch and I get along great.

My ankles are still as (un)svelte as ever, my belly bares no dark line, I’ve had no fainting spells, no aversions to smells, no midnight cravings, no achy joints. I know I am getting away with something and that if ever a blogpost needed a “jinx” label here it is.

Honestly, this is exactly how I would have predicted pregnancy would go for me (had I the cajones to tempt fate like that). Perhaps it was the years of battles struggling to fit birthing hips into skinny jeans that cemented my internal belief that I would be spared the months of agony that many women seem to slog through only to be rewarded with a screaming infant. 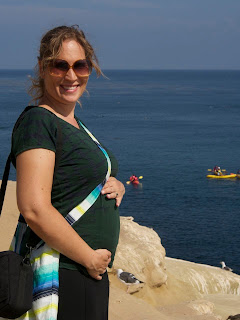 There has been one challenge of pregnancy over the past few months -- weight gain. I could have also predicted this outcome -- my birthing hips love nothing more than to become even more birthing. Staying this side of chubby has been a battle I’ve fought (mostly successfully) for years and I always knew that pregnancy would be the enemy’s secret weapon.

When I started to seriously think about getting pregnant I entertained the idea of tracking calories through the entire pregnancy to maintain a sense of control and, hopefully, avoid packing on too many pounds. Once I actually became pregnant this idea seemed absurd. In addition to the fact that doing this would make me look insane (which I might have sort of enjoyed) it would have also meant continuing to feel guilty for eating things, and I desperately wanted a break.

Things seemed great at the start -- up through month 3 I gained 0 pounds.

At month 4 the doctor said, “The weight was going to show up sometime.”

Looking on the bright side there have, possibly, been enough tears shed over the past few days to bring me down at least a pound in “water weight”. But I fear upcoming conversations like “Does the grocery store near your apartment have any ice cream left or did you eat it all?” “Did you feel that earthquake when you walked in?” and “MOOOOOOOOOO!!!!!”

The main problem is that I have only two eating modes:
As a result, all of my successful weight management in the past 10 years has been at the hands of 1200 calories per day and a spreadsheet. When you dip down to 1200 two things are almost always true:
It turns out that neither of my modes is particularly well suited for pregnancy.

I am loathe to make excuses about weight gain. Years of dieting have taught me that excuses rarely lead to solutions and you’re better off being hard on yourself. That said I do not know where this weight is coming from and I don’t really see it on my body (Extreme denial? Perhaps.). Additionally, if I’m going to be putting on mass poundage I would like to be eating a lot more pizza slices, hamburgers, chocolate cake and milkshakes -- as things stand I seem to be gaining primarily due to bigger than average servings of pasta with kale. I’m sort of torn between really going to town on all of my dream foods (you only gestate once?) and getting serious about monitoring my food intake. But, ever the good little student, I can’t bring myself to disappoint my doctor with Big Mac rebellion -- defeated, I have taken up calorie tracking yet again.

Posted by Brianna at 5:39 PM No comments: