Soon it will snow. This occurred to me while riding the train on a rainy day last week and suddenly I had butterflies in my stomach. Snow makes me ridiculously happy. 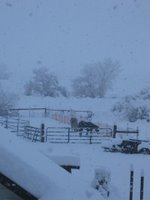 Despite growing up in I did not experience a snow free childhood. This may shock my east coast readers but has mountains (in fact it has the biggest mountain in the lower 48) and mountains have snow (that’s last January at my parent’s house on the left). So my fascination with snow cannot be pinned on a childhood of deprivation.

I spent 4 years at college

in western where the snow falls freely from October to April and (much to the annoyance of my housemates) I still could not get enough. College snow was the best as the campus was surrounded by huge expanses of unused semi-wild land where snow was never shoveled resulting in drifts with buried trees and never-ending expanses of white. 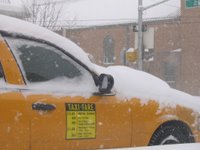 People complain a lot about snow – it gets dirty too quickly, it gets everything wet and muddy. All of these things are true but the city still looks beautiful under a new blanket even if the look doesn’t last. I spent my first winter in photographing every snow storm on my camera phone so the gallery is full of dark grainy shots of white. My main complaint about snow in is that the city is super quick to hall it all away. During the next snowstorm I need to motivate myself to truck out to time square at night when it’s quiet and covered in white. I once saw a picture of Time Square at 4am at the end of a huge snow storm before the plows had come and it looked like a wonderland – this is especially surprising since I usually think Time Square looks like hell.

I don’t understand how people can hate snow. When it snows I feel like magic is happening.

I used to joke that the perfect weather pattern would be 85 degrees and sunny from the ides of March until October first followed immediately by a huge snow storm every 5 days (replenishing the clean whiteness) until the next March 15th rolls around at which point the snow would instantly disappear and the cycle would begin anew. I can now admit that this scenario would leave me missing fall (and with the city currently looking so pretty in it’s splendid reds and oranges I have to admit that fall is worth experiencing) and the occasional cool spring day but I just know that winter alone will never bring me enough snow.

Your sick! I got snowed on in Yosemite last weekend. It was COLD and WET! only thing good about snow is it was nice sitting in the lodge in front of the fire place with a hotchoclate in my hand;)

I have so many memories of the rest of us groaning about the prospect of hiking to class through snow that came up to our waists, just wishing it would end while brianna would be humming a little snow mantra so it would keep coming.
For years I was convinced Brianna was actually responsible for all the snow in Geneva. I think I've stopped believing that, but if I'm right, I wouldn't mind if she could work out a snow day for me this year...