When Courtney was here a couple of weeks ago I spent much time roaming around the city watching her line up photos using her very serious looking camera. I sometimes like to think that I have some photo taking ability but seeing a real photographer in action and now seeing a few of the photos teaches me that I am only a lucky beneficiary of the digital camera age. I'm asking for a new camera for Christmas and I hope to spend some time while at my parent's house taking a few pictures around town and they'll probably look just fine -- but they won't complete with the art Courtney has created. 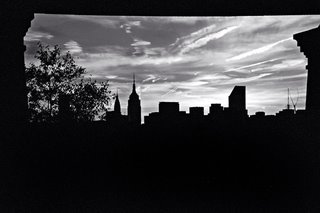 This was taken from my roof! it turns out that if I lived one story up I'd have an amazing view I should consider relocating next summer when the lack of walls should be less of a concern. This shot frames the city beneath the Hells Gate Bridge, the Chrysler building appears on the left just outside of the foilage and the Empire State building to its right. The slanty lipstick-like building on the right is the Citigroup Center. 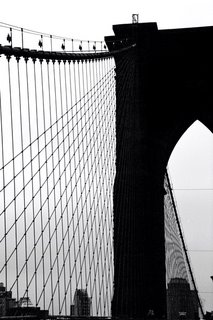 Courtney's visit afforded me the opportunity to walk across the Brooklyn Bridge for the first time. I think even I could have taken a beautiful picture of this bridge -- it's so statuesque and gorgeous that I doubt it can be ruined. Bridges amaze me -- I can never quiet believe that humans can build such things. 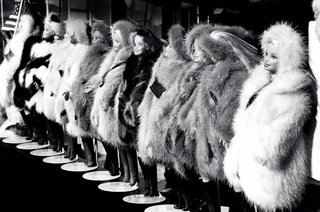 This is clearly the best picture ever taken by any foreign tourist as it serves as a metaphor for all that is American. These Barbi's in fur coats appear in the window of a fur store on Houston. There is one African American Barbi and the last doll holds a mini American flag -- This land truly was made for you and me. While taking this pictures a woman in leather shoes walked by and yelled at us, "That store is EVIL!!!" We nodded and pointed out that we were not buying furs and were in fact kind of mocking the place by photographing their ridiculous window display but she could not be comforted and continued her unspecific "Fur is bad" diatribe. I have to admit that I don't really understand why people get so rilled up about fur and yet not about leather or the meat industry both of which also kill animals somewhat cruelly and unnecessarily. It always seems to come down to cows being less cute.

Courtney has promised to send me a few signed copies of her favorite New York shots and hopefully this will inspire me to stop being so cheap and actually make a trip to the frame shop, then I can finally get rid of the cliche vintage posters that have hung above my couch for 6 years.
Posted by Brianna at 9:18 AM

What was she using, and what are you asking Santa for?

I have no idea what she was using because I pick my camera's based on looks -- the one I want for Christmas is thin and red. see here: http://exilim.casio.com/

yay I not only got a mention but my photos featured!