Usually when i think about sorbet (more often then you might think, certainly more often than is considered normal) I think icy which isn't always a bad thing -- icy limes or pineapples are a fine treat on a hot day (or on a cold day spent in my apartment where the temperature is always set at "2pm on a sunny day in August") but icy doesn't work for every flavor. In particular I usually can't get my tongue wrapped around the concept of icy chocolate but my recent desire to lose 3lbs (yes, I'm a little insane) combined with my constant desire to eat chocolate ice cream lead me to Sharon. This sorbet is almost everything one could hope for in a frozen chocolate snack. It's sweet and earth and smooth and even.. creamy! I attribute this on the inclusion of coconut milk in the ingredients list which also brings a little fat to the table -- but even with this allowance a half cup serving is still only 100 calories of OCD dieting goodness. 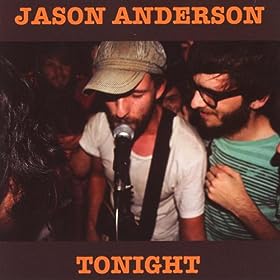 This guy/band/guy with a band opened for Tilly and the Wall at the Knitting Factory on the 21st. Or, the be more accurate, they/he opened for the opening band for Tilly and the Wall. One of my biggest pet peeves about the indie music scene (after the pretension and the lack of concerts with seating) is the tendency for everyone to get a little overzealous about supporting new bands which forces me to spend upwards of 2 hours standing around impatiently listening to whining/screaming that is not the whining/screaming that I paid $15+ to be listening to and often results in a 8pm concert not letting out until well after midnight which is apparently not supposed to bother me because if I was truly a cool indie music listener I either wouldn't need sleep at all or would not have a job where the man makes me get up before 11am. But back to Jason. I made every effort to be super late for the Tilly and the Wall show so that I would not have to endure 2 openers but in my world "really late" actually means "almost an hour after the doors opened!" and since in the world of rock and roll "on time" means "at least 30 minutes after the posted start time" the first opener was only on their second song when I walked into the venue trying (likely in vain) not to look like the oldest person in the room. Thank God for my crazy obsession with promptness! Jason and the band were adorable. I know that as very serious rock and rollers "adorable" is probably not their goal but there is no other word. Their music is fun and happy and demands a lot of audience participation (I have never "lalala-ed" or "oh yeahed" as much as I did that night) and they have the most excited and cuddly kid playing tenor sax. Writing this I'm now wondering if i should be concerned about my desire to mother the entire band rather than jump their bones. Jason Anderson may be the harbinger of my old age. I still recommend getting down to his songs -- even if you have to do so from the rocking chair.

A couple of months ago I noticed a troubling tear in the plastic coating of my Target rainboots. No longer water proof and ready for puddle jumping they had to be replaced. I was half tempted to order a new pair of novelty boots from Target since for $20 one can afford to go through a pair per year without much cause for complaint but then I remembered the stylish, knee high boots that an old coworker once wore on rainy spring days and my quest for a better boot began. I soon found out that I would have to really embrace my new Richie status if I was going to keep my feet dry in a pair of Hunters as the boots cost $98. Thus ensued a personal struggle of Hamlet-esque proportions. Was I really willing to spend ONE HUNDRED DOLLARS on rain boots? When I didn't yet own a house? When the media won't shut up about how bad the economy sucks and just how soon I'm likely to get laid off? Yes. I can happily report that the Richies have dryer, svelter, more content feet and calves. The rubber boots are so much sturdier than the plastic predecessors and the extra height somehow seems slimming and more mature. The fit on my foot is also much tighter than the Target alternative which makes the boots more practical for the amount of walking done in the typical NYC day (even if it's pouring rain). My only complaint about the wellingtons is that every time I pull them on I have to wonder why my lower legs are hugged so snuggly when the calves of other girls seem to be swimming in their boots. Do I have the largest calves in the world? Should Guinness be notified? Do you think I could make enough money off of this deformity and my upcoming TLC special to justify a second pair of Hunters in Navy?

Two low fat frozen desserts in the same post? Be not shocked -- my life is really just one never ending quest for an acceptable low calorie ice cream substitute periodically interrupted by the distractions of building software and gawking at really trashy television programs. Red Mango is one of the dozen or so Korean frozen yogurt chains that has cropped up after the Pinkberry craze took hold a year ago. I have eaten and enjoyed Pinkberry once in the past but do not know it well enough to declare Red Mango a taste improvement but I do know that a small Red Mango is ~$3 which seems crazy cheap to me whereas I remember being slightly outraged at the cost of a small Pinkberry (but this was a year before I spent $100 on rain boots so it's possible that my idea of "crazy expensive" has evolved). The yogurt is creamy and a little sour and the pomegranate seeds burst and crunch satisfyingly and the whole concoction was dinner on Thursday for only 90 calories. I am considering a blanket replacement of all dinner with Red Mango until I'm rid of that blasted 3lbs, I may even go for 5.
Posted by Brianna at 4:26 PM

Chocolate is for ICE CREAM.

FRUIT is for sorbet.

Gotta give you props for the pomegranate, though. I'm a big pomegranate fan.

I am also a fan of Red Mango, and I think it IS better than Pinkberry.