I finally got a Wii last month thanks to the incredible awesomeness of my friend Joe who all but held a Target employee hostage in his quest to get me to shut the fuck up about wanting a Wii. It is entirely possible that this was a ploy to lay claim on my first born child which seems like an entirely fair trade especially since kids poop and cry and my Wii does neither of these things. Which is not to say that life with the Wii is a feces-less utopia.

Actually owning a Wii has done little to change my love/hate relationship with Nintendo, in fact the frequency and decibel levels of the cursing has only increased. You see, in addition to the fact that Wii sports thinks I'm 70 years old (I blame baseball, and my bad hip, and possible the difficulty of boxing in Depends) Mario Galaxy is an evil little turd of a game. Right now I have 3 open planets none of which start with a level that Mario and I have any hope of getting past. Sometimes I wonder if I really like video games at all since the majority of my play time is spent clenching my fists, foaming at the mouth and taking out my aggression on the relatively innocent pillows that clutter my couch. I very rarely want to punch or throw things in real life (choosing instead to brood silently and beat myself up for having any feelings at all) but put a controller in my had and some cartoon goofballs up on the screen and I'm a regular Wario on an invincibility star high.

Below I present a completely unbiased review of the levels that are currently making me doubt my princess saving prowess.

First up is the candy level where Mario is forced to jump to his doom or be shocked by some sort of electric fence over and over again until there are no more Mario lives left and I have no choice but to growl like some sort of rabid Bowser/Peach hybrid and then cheat by resetting the game without saving. This level pretty much sucks. I think we can all agree that with the possible exception of a love handle or a cavity (both of which are certainly outweighed by deliciousness) candy has been nothing but good to people so to misrepresent chocolate and gumdrops and the occasional river of corn syrup in this way seems especially cruel.

Next there is the surfing atop a stingray level that requires me to hold the controller steady which brings up some serious genetic questions about people in Japan because the American human arm was never meant to perform in this way which is why the actual game has Mario balancing on his FEET not on his ARM. (which is not to suggest that I would be more able to pass this level if actual surfing were involved because I know from experience that were that the case I would only be more likely to end up as a broken body washed up on the shores of Marioland only to be calously picked on by every passing goomba and koopa, my lifeless body unable to fight back with even a little jump or spin). This level pretty much sucks. I hope the CIA is researching and planning for the superhuman arm balancing abilities of the Japanese (not to mention their apparent alliance with the stingray community) because I fear for the future of our nation. 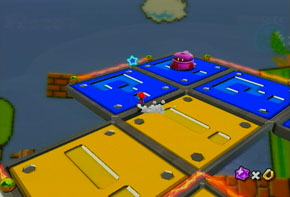 The last open level of torment is the switch level which on its surface seems like it should be easy but in reality this level pretty much sucks. The idea is for Mario to run around until he's touched every square on the planet and as long as you can avoid the roaming open electrical currents (a constant plague in this game making me wish for a few electrical shock resistant pikmin to neutralize things) it's an easy win. Of course this is a ruse as actually avoiding being shocked to death is impossible.

I am embarrassed to admit this but in an effort to get images for this post I looked at a game walk through and I am not even 1/7th of the way through this torture. There is pretty much no way I'm not going to end up with an ulcer and a sofa full of fist shaped holes.
Posted by Brianna at 2:05 PM

I can't picture you punching cushions. The foam at the mouth, yeah, easy, but like the double foot jump stomp and blood shot eyes? Not so much your style.

I have the first Super Mario for 64 and it's still kicking my ass. I've played a little bit of Super Mario Sunshine and it seems SO BIG to me. I can't even imagine playing Super Mario Galaxy. Seriously... I'd probably be the next poster child for When Bad Wii Games Happen to Good People. Or something.

I think it is time to design the game you want to play!

Damn... I thought that securing her a Wii would make her shut the fuck up... but alas, wrong again Joe

Well, don't I feel all sorts of spring chickeny today. My nephew's Wii said I was 3 YEARS YOUNGER than I am.